#StudioTrappin - 5 Ways to Use Imaginary Collaborators in the Studio - www.StudioTrappin.com 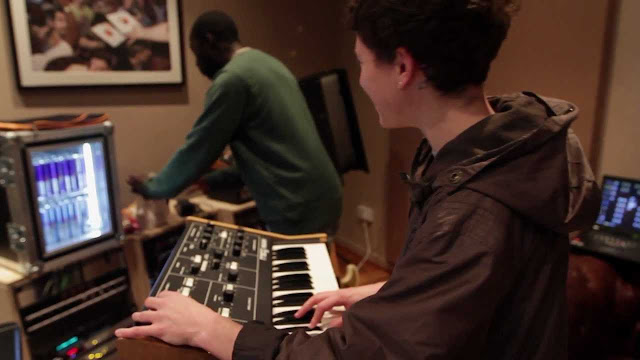 Collaborating with other people in a creative process can be incredibly rewarding and there are few other ways to grow faster as an artist and a professional.
In a perfect world, we’d all have constant access to great musicians, fellow audio engineers, or just friendly people with great taste and judgement. However, reality is such that many of us work alone most of the time and some of us are not that comfortable with sharing our creative process with other people.
While I do think it’s a great idea to try working with other people when the opportunity arises, here are a few ways to use the concept of collaboration without having actual human beings around.

Sometimes you’re running out of inspiration or your musical ability is simply not up to par. Having some MIDI files with notes played by real players on your hard drive is a simple and effective recipe for a great sounding instrumental part or even a totally new direction for your song or production.
You do have to be willing to go in and do some heavy editing when necessary. You might need to change the pitch or timing, move things around, mute some parts while looping others, etc.
You can buy MIDI files from loop libraries or use ones that come with virtual instruments like Addictive Drums or EZ drummer, but my favorite way to get cool MIDI files is to go looking for great grooves in existing songs, sample a few bars from it and then convert it to MIDI.
Some DAWs like Ableton have this ability built in, otherwise you can use software like Melodyne or even zoom in on the wave file and place the MIDI notes in the right places on a MIDI track below it.
Remember to change the BPM of your session to the BPM of the sample before converting to MIDI so that the loop starts and ends in the right places. After that, you can change the BPM to any tempo you’d like because now you’re working with MIDI. Pretty handy. Edit and tweak until it fits the music you’re working on and save the file for later use.

Recording lead vocals on your own in the studio can be an underwhelming experience. Apart from the problem of lack of objectivity, when you’re assessing your own voice and performance it can be hard to find the right energy level and presence in the performance. You’ll often end up being too much in your own head. This is usually a bad thing when you’re performing live and it’s a safe bet that it’s a bad thing in the studio too, since you still need to reach an audience, there’s just a time delay involved.

Imagine you’re singing in front of an audience. Closing your eyes and visualizing one can be a good way to go. And make up a pretty damn fantastic audience while you’re at it. This can help you project the energy forward when you’re singing and let you more easily reach that extra level that makes the difference between an average performance and an inspired one.

When Stevie Wonder recorded his early work he’d play all of the instruments himself on a number of tracks. The story told by those attending the sessions is that Stevie didn’t try to sound like other musicians; he would fully become that person in his mind when he played, performing as kind of an actor as well as a musician.
While not every one of us has the musical abilities of Stevie Wonder, this technique can work well when you’re looking for a certain sound and don’t have anyone around who can deliver it. I’ve done this on a few occasions with good results. I’d say it works best if you choose a musician whose work you’re very familiar with.
Take a minute to ”get under the skin” of the musician you’re impersonating. What kind of feel would he or she be looking for? Is it busy with lots of notes or more minimalistic? What about the tone? Are you starting to hear the rhythms or even the specific notes in your head? Try to imagine being this person, invited to your session and ready to play. Now start playing those notes.

I don’t remember where I originally heard about this slightly quirky technique, but I’ve used several versions of it over the years. It’s a technique for singing background harmonies on your own when the sound of a group of different singers is desired.
This is similar to the Stevie Wonder technique but I tend not to use real artists as the archetype for the performance. To me, it would feel slightly too jokey to throw a Bob Dylan or Neil Young impersonation into the mix.
Don’t overthink it, but take a few seconds to find the voice and mannerisms of the person you’re imagining. Think about the body shape and personality of this fictional character. Use a cardioid pattern on your microphone and do the first take imagining this person singing it.
Create a new character for each take and move around so you don’t do all the takes from the same angle. This will help increase the difference between the voices you create by varying the frequency response of the microphone.


It’s happened to me so many times. I’m working on a mix and feel pretty good about it, so I ask someone else to listen to it and tell me what they think. The very moment I press play with the other person in the room I start hearing things that aren’t working the way they should. Arrangement issues suddenly pop out at me: the high end of the vocal needs more shimmer, the automation just before the chorus isn’t aggressive enough, and so on …
While it’s great to have someone come in and listen to your mix who can surely offer some valuable perspective and feedback, the option isn’t always on the table.
I’ve found that the little shift in mindset that lets you hear things which seemed hidden to you before the other person walked in the room can be approximated with some help of the imagination. The best practice I’ve found for this is to do it when you normally take a break.
Simply walk out of the control room and go do something else for five minutes or more, and when you come back, imagine someone else is in the room listening to the mix for the first time. If you tap deeply enough into your imagination, you’ll probably find that you start hearing things in the mix that you hadn’t noticed before.
at March 22, 2018