Labels Are Signing 2 Artists A Day - Thats 730 ARTISTS A YEAR PER LABEL?? So What are they up to?? Check Out The Video Here - www.StudioTrappin.com 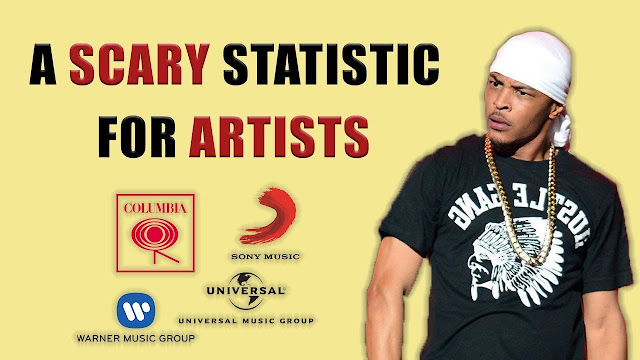 VIDEO AFTER THE ARTICLE BELOW

It’s the stat I just can’t get out of my head.
In 2017, according to a report backed by the U.S. music trade group RIAA, major record companies signed a total of 658 acts — a number up 12 percent over 2014. In 2019, that figure (judging by the subsequent launch of additional frontline record companies at Warner Music and Sony Music) must have grown yet again. Even at its 2017 level, it suggests that the major record companies — across Universal, Sony and Warner — are signing somewhere close to an average of two artists every day.
Another stat from 2017, this time from worldwide trade body IFPI, shows that, globally, those same record companies spent $4.1 billion on A&R (the money required to sign artists, and to develop and record their music) in the same year. This works out at approximately $11 million per day. Just to run that by you again: $11 million being spent every 24 hours, to sign nearly two artists a day, or more than 50 artists each month. Does this sound like sensible commercial behavior to you?

Some would argue, yes, it does: The major record companies, one could posit, are responding entirely pragmatically to two sets of modern market phenomena that de-risk their position: (i) their growing profits from streaming, enabling bolder financial speculation on artists; and (ii) the perpetual income provided by Spotify, et. al, delivering a “long tail” of income for each act, as opposed to the one-off CD/download sales paradigm of years gone by.
Others, however, see things differently. Can these record companies, they ask, really be performing at their optimum level with two new artists a day to develop, record, promote and market? Is this really the best thing for the artists in question, and the sustained attention they require to cut through in the marketplace?
One of the most influential figures in the global music business recently provided me with some food for thought on this matter. Jody Gerson works on the publishing side of the industry, in one of its most powerful positions: She is CEO and chair of Universal Music Publishing Group, a company that turns over $1 billion every year. (She also happens to be the first female CEO of a multinational major music company ever.)
Gerson knows what she’s talking about when it comes to A&R: Over the past two decades, she has signed the likes of Billie Eilish, Lady Gaga, Post Malone, SZA and Alicia Keys. In doing so, she has demonstrated a career pattern of quality over quantity; Gerson and her A&R team pride themselves on backing specific talent early, and committing to them as year-round priorities, rather than spreading their bets with a more scattershot approach. (Her latest big-money deal was with hotly tipped new Spanish star Rosalía; remember the name.)

“I think it’s unfortunate that people don’t always have the time to develop into greatness,” Gerson told the newly published Music Business USA magazine about record-business A&R in the streaming era. “Everything is just that much faster.
“One big difference today is that the industry has bought into this idea that we have to keep on feeding distribution and the [streaming] platforms. But there is only so much music that can be brilliant.”
Gerson hits on an interesting point: Whose agenda does the profusion of signings that record labels are making every week really serve? One major beneficiary, as she suggests, is streaming services like Spotify and Amazon Music, which are given a fresh menu of megabucks-backed new tracks every seven days, and are able to use this conveyor belt of content to market their own subscription platforms.
Yet is this tsunami of new artists also cannibalizing consumer attention, actually making it harder for major record companies to achieve their number-one goal: making the public care about, and spend money on, a handful of blockbuster new artists? If you’re signing 50-plus acts every month as an industry, are you harming your chances of giving one extra-special star the oxygen he or she requires to flourish?
It is certainly interesting to consider the fact that Billie Eilish, undoubtedly the breakthrough artist of 2019 so far, was signed and developed by a quasi-independent record company, L.A.-based Darkroom, before major label Interscope got heavily involved via a joint venture. As such, in the formative stages of her career — when a core fan base was built that would propel her to superstardom — Eilish benefited from the undistracted attention of a smaller record company, which didn’t have to worry about a sea of fellow artists on its roster.
For the major record corporations (Universal, Sony and Warner), the volume of their annual signings is directly connected to a long-standing music business hallmark: market share. Around the world last year, according to MIDiA Research, the major labels distributed music that claimed more than two-thirds of global market share on a revenue basis. With Spotify now hosting the work of more than 3.9 million “creators,” who cumulatively upload nearly 40,000 tracks to the service daily, any slowdown in the major labels’ signing and release frequency would inevitably cede global market share to the rampant DIY artist community (something experts predict will increasingly happen over the next decade anyway).
XXXXXXXXXXXXXXXXXXXXXXXXXXXXXXXXXX
Why does this potential market-share loss really matter? That’s debatable. It certainly matters for intra-industry metrics: Some senior major record company executives continue to be judged (and bonused) on their labels’ market-share performance. It also probably matters for “Black Box” money received by major music companies too.
“Black Box” is shorthand for lumps of cash delivered to labels and publishers from various sources — legal settlements, broadcasters and digital services — that can’t be easily be accounted to artists. For example, last year Facebook was reported to have paid the major record companies “blind” or “blanket” monetary advances for use of their music on its platform, with the size of these checks almost certainly sliced up on a market-share basis. These advances, however, were not tied to any specific data about how this music would be used/played by Facebook users. Without such usage data, labels and publishers would have been left to decide behind closed doors what, and what not, to pay to their rosters from this windfall.
Perhaps the biggest danger regarding the vast volume of artists now being signed to record companies is simply a matter of commitment. The industry is rife with stories of artists who took an initial misstep in a campaign, then followed through with a smash hit after being given a second chance (and a second wave of investment) by their label partner. Will an industry signing 658 artists a year be less inclined to stick things out in this way, rather than just moving on to the next artist at the first sign of trouble?
Ian Montone is manager of artists such as Vampire Weekend and Jack White, with whom he has enjoyed successful record-label partnerships with the likes of Columbia and XL. On other occasions, however, Montone has seen record labels switch focus away from his acts after an initial commercial falter — attention-starved behavior that’s only likely to increase as the volume of new record company signings keeps cranking up. Says Montone, “I’ve been in label meetings when they’ve literally said, ‘Sorry, the song’s not working.’ The song’s been out literally a day — what are you talking about? ‘Nope, we’ve read the numbers — we’re going to move on.’ ”

He adds, “I like it when [record companies] react to that situation by rolling up their sleeves, digging in and remembering why we’re all here in the first place.”
Tim Ingham is the founder and publisher of Music Business Worldwide, which has serviced the global industry with news, analysis and jobs since 2015. He writes a weekly column for “Rolling Stone.”

VIEW THE VIDEO BELOW