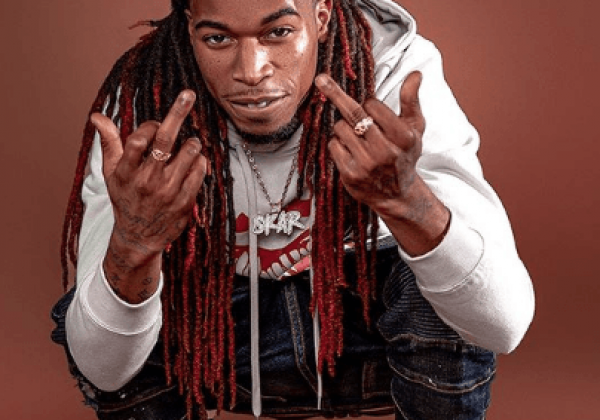 Sir Heist: Introduce yourself to the fans
Skar: My Names Marcquise Dionte Burgess (Skar) Im an upcoming hardcore rap artist out of Sacramento, California known as the capital of the West Coast. Im the Child Of Tina Vice and Christopher Burgess although I was raised by my mother and stepfather (Dushaine Turner). I have 1 older brother (Monterio Burgess), 2 younger brothers (Dejean Turner, Zavarion Turner) and 1 younger sister (Destyne’ Turner). My Birthdate is December 29th 1991 (Capricorn). I Have one child a daughter named “Myracle’4 Burgess”.

Sir Heist: How did your artist name come about?
Skar: My artist name came about from a street friend named Rico. Rico is from Oakland so we would play fight with each other over turfs as kids and I would more than often leave some kind of scratch on him from slap boxing. He start calling me Skar and telling others to do the same so I took it and ran with it. That was way before the music was ever thought about.

Sir Heist: Where are you from?
Skar: Im from the West Coast Sacramento ,California. Im from the East side of the city Lincoln Village Neighborhood close to the Rancho Cordova area.

Sir Heist: Who were your musical influences growing up?
Skar: I was highly influenced by Lil wayne when I started rapping he had just dropped The Carter 2 and the punchlines he was saying were raw but still gangster and I was feeling how he was coming over the beats. I also listened to some of the fellow friends that I grew up around who were rapping before me. Another guy that influenced me was Reed dollaz, The Jacka, and J Stalin.

Sir Heist: What hip-hop albums did you grow up listening to?
Skar: Some of the Hip hop albums I enjoyed listening to growing up was Lil Wayne The Carter 1 & 2, Meek Mill DreamChasers 1&2 , The Jacka Devilz Rejects, J stalin Prenuptial Agreement and a few others.

Sir Heist: What is the current single/project that you are promoting?
Skar: Ive currently released a video entitled “Cold Out” ft Prezi out of San Francisco. Its a big song for me off of my upcoming album “On Behalf Of The East 2” releasing early March 2020.

Sir Heist: How did the record come about?
Skar: The record was well overdue. Ive been knowing Prezi for a while now and he’s done well with his success it was time for us to put our minds together and create something dope for the streets. We’ve toured with each other and been in the studio multiple times due to Mozzy.

Sir Heist: What would be your dream collaboration with any rapper or producer?
Skar: My dream Collaboration would honestly be with Meek Mill. I chose Meek because he’s always caught my attention with his energy. The flow he brings and the energy behind it I really feel like it’ll be a dope Coast to Coast track. I know he raps over beats with soul and Im into that. The jacka also rapped over beats with soul and I already have a track with him he was my favorite artist.

Sir Heist: Are you currently touring or have any upcoming shows?
Skar: Ive just got off tour with Mozzy back in September 2019 “The Internal Affairs Tour”. That was the 2nd tour I’ve Been on with Mozzy the tour before was “The 1 Up top Ahk Tour”. Ive performed in New York, Atlanta, Boston, Oklahoma, Washington DC, Los Angeles (Hollywood) & More. I currently have an upcoming show in San Diego in April 2020.

Sir Heist: How is the response from your fans & djs been?
Skar: My response from my fans are always good. They show me unconditional love and support with everything that I do. Ive been on multiple channels and blogs over the years and they always follow up and leave dope comments. My fans still buy my hard copy cds overseas from stores and they stay tuned in with all my latest music. All of my videos and songs I’ve released on youtube have doubled if not triple the amount of likes it has dislikes. I don’t really get negative feedback a lot. Dis always ask to spin my music in their cities and clubs, even on tour i locked in with 4 different dis who told me they’d personally travel with me if needed on future events or events in the city.

Sir Heist: What are your plans for 2020? What are you doing that others are not?
Skar: My plans for 2020 are to direct my fans to my own Vevo channel and gain the attention of an A&r or someone that can lead me to a path of success within this music industry . One thing I can say that i do that a lot of others don’t do is be versatile. A lot of people I make music with or have been around only have one sound or one style. I have a main style I stick to just so my fans can recognize me and get use to me but over the years I’ve always added something extra something different and I’ve never been afraid to reach out to someone out of my region to collab with. People are afraid to take the chance of making music with other people who bring a new sound to the table. Their afraid of a possible change and I’m not.

Sir Heist: How can your fans reach you?
Skar:
My fans can mainly reach me on Instagram @Skar_34 or my email Bookings4skar@gmail.com

Sir Heist: Any last words or shout outs?
Skar: I want to give a shout out to everyone who helped me get where I am today my parents especially. As well as a big shoutout to No feelings Ent, Mozzy records, and Empire for helping me with my career.